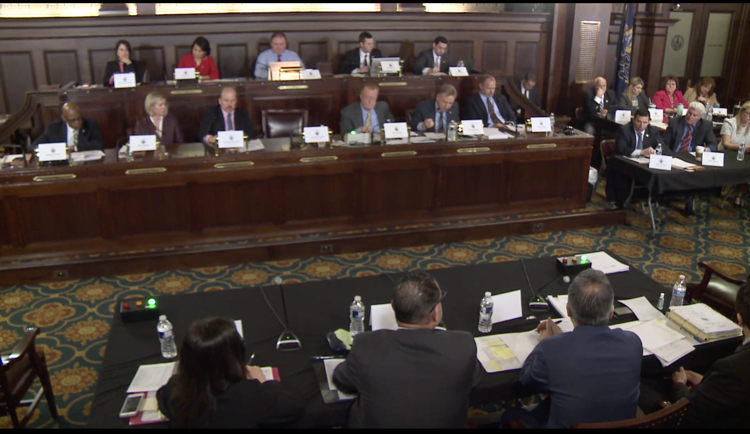 Legislators agree that Pennsylvania’s toxic schools – plagued with lead, asbestos and mold – need remediation, but House Republicans said that increasing the state’s debt load to do it seems like the wrong way to fix the problem.

In the three decades since its inception, the RCAP budget cap grew from $400 million to just over $4.5 billion, with recent curtailments in 2013 and 2017 bringing it back down to $3.35 billion. If Wolf’s plan wins majority support, lawmakers must again raise the cap.

“I don’t know why we are going through RCAP,” Rep. George Dunbar, R-Westmoreland, said during a House Appropriations Committee meeting Monday. “RCAP was not designed for schools, and it’s very specific about what it’s designed for. Nobody wants to send kids to schools with asbestos and lead, let’s not kid ourselves, but let’s find a proper way of doing this.”

Department of Education Secretary Pedro Rivera said Wolf chose RCAP because of its ability to distribute funds fast. Approximately 175 buildings in the Philadelphia school district alone contain asbestos and six more have already closed. In September, the Philadelphia Federation of Teachers announced that a veteran educator had been diagnosed with mesothelioma, a cancer caused by inhaling asbestos fibers.

“Because there is a dire need, we should act quickly,” Rivera said. “I can absolutely say that $1 billion is only a start.”

Republicans pressed Rivera for more information about how the state planned to distribute the grants, few of which he could answer definitively. He said the plan and the department’s evaluation of needy districts remain in their early phases.

“I think this is an extremely difficult situation to describe,” he said. “You think when you go into these toxic buildings, you can see it, but it could be as simple as a crack in a chalkboard.”

“These are problems that have been ignored for the past 50 years, and now it’s 2020 and we are still trying to figure out if this billion dollars is the real number?” she said. “Our [Philadelphia] mayor has spent $1 billion over the past four years, and the allocation is a big concern since there is a big need. You’re telling us you’re going to spend a billion, but you haven’t even told me how many years you’re going to spend it over.”

Committee Minority Chairman Matt Bradford, D-Montgomery, pushed back against Republicans’ hesitance and said he sees few other solutions outside of borrowing.

“We know our kids are going into schools that have been affirmatively closed because of lead, asbestos and mold,” he said. “So while we can quibble about whether the first authorization should be for $1 billion or $100 million, we need to get the ball rolling.”

Majority Chairman Stan Saylor, R-York, said the Legislature can both fix toxic schools and question how some buildings fell into such disrepair in the first place, bristling at the implication that his party’s questions signal an unwillingness to help.

“I’m not willing to give anybody a pass for their incompetence,” he said. “Nobody is saying we shouldn’t fix the problem on this side of the aisle, but somebody should be held accountable.”

Stay Up To Date!